Its no secret that there are many options for playing classic platformers, arcade titles and 2D fighters on the Switch. Besides Nintendo’s own Pro Controller and various 8Bitdo Bluetooth Controllers, there are also more affordable wired controllers provided through companies like PDP and PowerA.

However, despite the fact that we can purchase third and first party wired and wireless controllers, for those of us who want true portability without the use of an external controller usually would have to resort to modding to get the results they are looking for. While there are also plenty of options for unofficial joycon shells, this requires sacrificing an official joycon and implanting the guts into the new shell. If you are not skilled with taking things apart and putting them back together, this could turn into a potential and costly mess. That is where Hori steps in.

Recently in Japan, Hori released their first D-Pad Joycon Controller for the Nintendo Switch. The original model is blue and adds a much needed D-Pad in place of the Switch’s Directional Buttons. However, earlier versions of this controller were reported to have some issues in the fairly recent past. Luckily for us in the West, those issues have been resolved through a revision in the original design and as a result, we got a Legend of Zelda: Breath of the Wild themed D-Pad Joycon. Its sleek exterior was cast in a classic smoke black that is reminiscent of the GBA and adorned with gold Hylian Crests. The plastic is semi-transparent and the electronics can be faintly viewed if there is a decent light source near by.

Features (Or Lack of):

Upon the unboxing, the first thing I noticed was just how light this version of the left joycon actually is. This has to do with the fact that HD Rumble, wireless capabilities and the lithium ion battery are non-existent in this model. In fact, the D-Pad Joycon clips into the left side of the Switch and directly uses power from the console’s battery. However, this is to be expected at a $25 price point.

The good news is that Hori did not sacrifice much when it comes to the build quality of the casing, its very comfortable plastic and rubber texturized d-pad and an analog stick that functions and plays exactly like Nintendo’s official left joycon. However, the minus and take screenshot buttons have been replaced with rubber instead of plastic, giving them a squishy feel. While this does not directly effect actual game play, it would have been nice if Hori went with plastic for these buttons as well. Despite that change, I have never been in a situation where these buttons would stick to the casing. The overall feel has a very first party quality to it.

For this test, I decided to play Arcade Archives emulated version of Samurai Showdown IV. When it comes to testing the accuracy of a d-pad, old school SNK style fighters are a great proving ground because back then, they require precise quarter and half circling motions that do not allow for compromise on the motions. The d-pad performed quite admirably as I was able to accurately dish out tornadoes and helicopter slashes. Forward, Down, Down-Forward motions felt correct and the timing was very on key.

Last night, it just so happened that the Mega Man 11 Demo was released on the eShop so this was the perfect opportunity to test out the d-pad and give Capcom’s latest run with the Blue Bomber a spin. I’m happy to report that despite the fact that Mega Man 11 utilizes a new 2.5D 3D Model based engine, the d-pad felt quite comfortable and NES accurate. Because of the rubberized plastic pad, I felt a lot less fatigue on my thumb. Mega Man would move and stop on a dime. The triggers are also very accurate and feel just like Nintendo’s official joycon controller. Use of triggers in Mega Man 11 is important this time around because you can switch between powers on the fly.

In addition to Mega Man 11, I also played Dead Cells, Sonic Mania, Bloodstained: Curse of the Moon, Mighty Gunvolt Burst, Megaman X5 on Megaman X Legacy Collection and Blaster Master Zero. Every game played the way they should and in some cases, even slightly better from the enhanced accuracy that the d-pad offers. 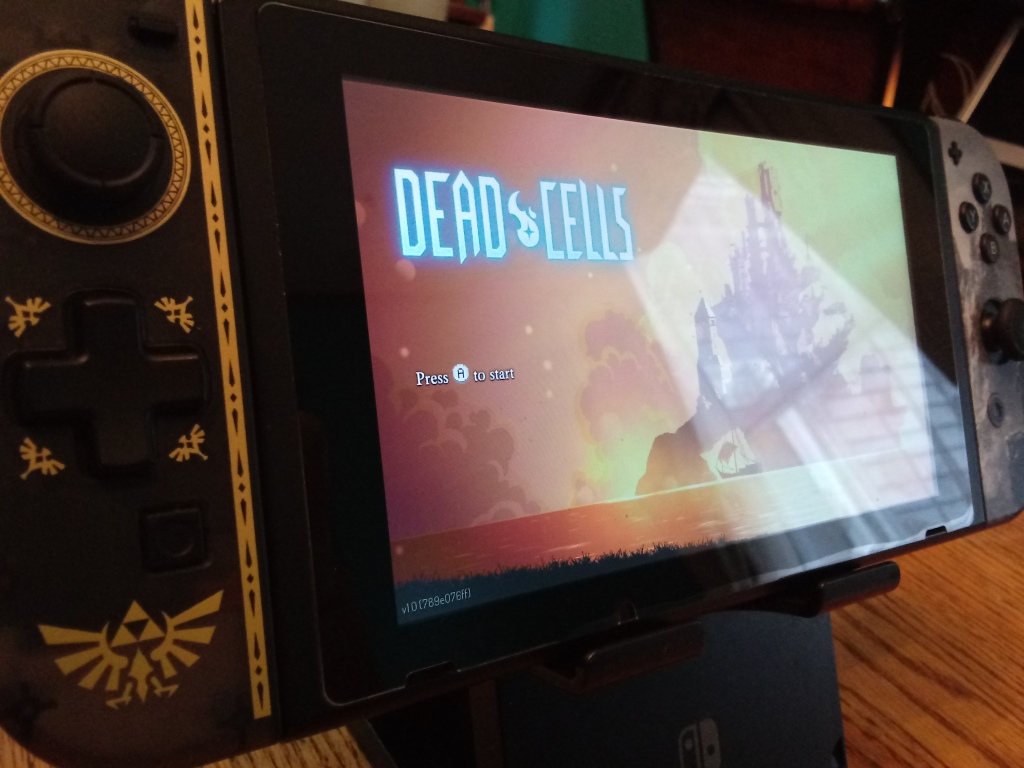 For this test, I started with the remaster of Treasure’s now infamous Dreamcast and Game Cube bullet hell shooter, Ikaruga. I was able to dodge and absorb bullets with ease. A technical masterpiece, Ikaruga is an excellent test for the d-pad since fast reactions and the player’s complete attention are required for completing any level. The only minus I will admit for using the d-pad joycon with Ikaruga is the fact that I cannot put it into its vertical screen format like I can with a regular joycon since the system would have to be turned on its side to view the game this way. However, this does not effect game play and once again, the d-pad did what it was made for.

On the puzzle end, I played the remastered version of Lumines. It was very easy moving and shifting blocks around the screen. Holding the d-pad down moved blocks across the field without a stutter. The one thing I missed though was the HD Rumble feature. In Lumines, it uses both joycons to actually let you feel the bass of the music while you are playing the game. While I was still able to feel the bass from the right joycon, the d-pad joycon on the left took a stereo experience and made it feel more mono.

Despite the lack of options, if you need accurate controls for classics, indie games and fighters, at $25, the Hori D-Pad Joycon is money well spent. Due to its lack of features, its not a permanent replacement for Nintendo’s official offering.  However, its a welcome return to a more traditional control setup that enhances the enjoyment of a lot of games in the Switch’s library. While it may be the only alternative to the official joycon at the moment, if you want a d-pad in portable mode, its not just the only alternative, its a very high quality one and works when it counts the most.